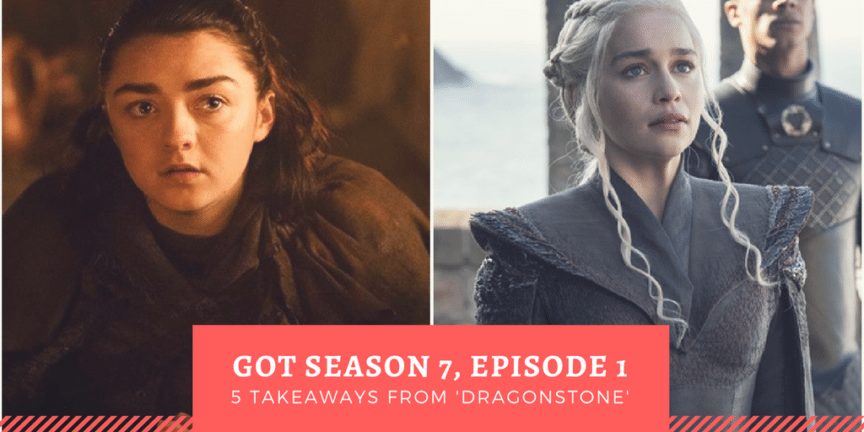 It’s back! My yearly 10-month hibernation between seasons is finally over and I can enjoy the world’s favorite TV show once again. The first episode of the long-awaited seventh season of GoT started off with a bang to say the least, but fell into the familiar first episode plot setup that we have seen in recent seasons.

My expectations for the first episode are always somewhat tapered— always good to see the show back but, understandably, a lot of exposition to set the stage. We’ll take a look at some of those major plot points, as well as some important smaller ones that may have significant impact as the series progresses. 1. Winter came for the Freys

[Bleep] it, mask off. Everyone in the room was electric when Arya revealed herself. I remember Walder Frey dying at the end of season 6 (Arya slits his throat), but I genuinely thought it was a flashback with the real Frey. Didn’t see that one coming.

What does this mean? Well, it means that Arya has come into her own as a stone-cold killer, and big things are in store this season. She is able to utilize what she learned while at the House of Black and White, but has gone rogue, taking revenge on any enemy that has messed with the Starks. What magic makes the faces seem so real and grants her the voice of a 70-year old man is still undisclosed, but I won’t hold my breath on a detailed explanation of that. Also, rather than go to Winterfell, she is setting her sights on the Cersei, which could make things VERY interesting. 2. You Know Nothing Jon Snow

Except this time, the redhead calling out our brooding hero is his sister. The argument between Jon and Sansa could mean important plot development. They always argued when they were children, and they still have a similar brother-sister dynamic. Jon doesn’t take her sound advice seriously, and Sansa doesn’t treat Jon with the proper respect as the new leader of the North.

Littlefinger, meanwhile, is just loving life during their clash. That unbearable smirk permanently stuck to his face like gum on a shoe. Sorry, I just hate that guy. I do admire his craftiness though, and—mark my words—he is absolutely planning something devious. He will certainly be looking to leverage their disagreements to divide the two, but whether or not he succeeds is to be determined. Either way, he has always looked out for himself and I’m sure he’ll look to advance his power and influence soon.

Oh yeah, and there’s apparently a big ass mountain of dragonglass underneath Dragonstone! The book Sam had in the extremely Harry Potter-esque restricted library let out that the entire place is full of the rare mineral. If taken advantage of, it will certainly prove useful against those white walkers, who have serious obsidian allergies. After all, if Sam can do it with a dagger, anyone can!

SERIOUSLY, DID YOU NOTICE THE SUBTLE ED SHEERAN CAMEO??

Well she apparently took all of 5 minutes to mourn the death of her last surviving son, Tommen. The wimpy little guy couldn’t take it when momma blew up his queen, so he took the plunge off the castle right after. I thought it was strange that Cersei seemed to act as if Tommen was nothing to her—perhaps she is just left blank, emotionless after all her children are dead. Unfortunately for our friends in the North, now she has even more room inside for hatred. Cersei begins to set her eye north as her empire begins to crumble.

She also gets a surprise visit from Euron, the latest dbag to emerge from the Iron Islands. He hits on the queen like a Frat boy, all while throwing shade at Jaime. His proposals for marriage are turned down, but he promises a gift for her and walks out. As abrasive as he may be, at this point the Lannister’s need all the allies they can get.

Now, what will the gift be? I think who is a better question… FINALLY!! As Dany kneels down and takes her home soil in her hands, fans everywhere rejoice as we can now stop hearing them talk about “crossing the narrow sea.” The entire city is strangely abandoned, which is surprising considering it is prime, beach-front real estate. This beautifully-shot sequence mainly serves to give us a sweeping vista of her new fortress and a chill down our spines as we think about what’s next for our favorite platinum-blonde dragonrider. Regardless, we are in for a crazy season. Keep up to speed with us each week as we delve a little deeper into the episodes. WINTER IS HERE!

Thanks for reading. Leave with your biggest take from the episode and we will see you next week for another recap.