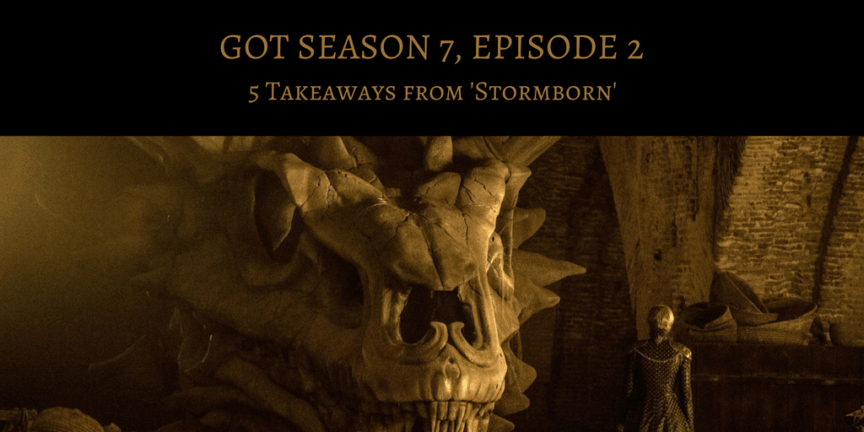 Ok, so there’s really six points. Needless to say, a lot happened on the last episode of Game of Thrones. Daenerys and Tyrion draw up their battle plans, Jon plans to forge an alliance, Jorah goes to the dermatologist and, oh yeah, there’s a FREAKING BLOODBATH at the end of the show. You can really see the new seven-episode format taking shape now, as there is hardly any filler in the episodes anymore. There seems to be real weight to each scene and the plot is being moved forward much quicker than the typical GoT season. Here are my favorite takeaways from ‘Stormborn.’ The plan is simple: The Tyrells will attack King’s Landing, the Unsullied will try and take Casterly Rock, and Yara and the Iron Fleet will transport the Dornish Army to join the assault on Cersei. Seems like a good plan, I’m sure nothing will go wrong this episode…

After the battle planning, Dany just kind of snaps on Varys and puts him on blast for serving so many kings, etc. I thought this was a little uncharacteristic of her, but I understand her wanting to make sure her council is loyal. Varys has served many different leaders, true, but he has been nothing but loyal to the queen and I do believe his interests are for the good of the realm. He pleads his case, which she accepts before adding, “If you ever betray me, I’ll burn you alive.” Ah, nice touch.

Apparently Melisandre is still around. Geez lady, give it a rest already! Did everyone forget that she burned a child alive?? Anyway, she gives Dany some of the usual prophecy crap about the “Prince who was promised” before Missandei explains that it’s 2017 and gender assumption isn’t cool. The High Valyrian word for prince is actually non-gender specific, which means Khaleesi can still fit the bill.

P.S. We won’t be getting into the Grey Worm/Missandei scene. Don’t complain—you already saw what happened, ya pervs.

Winterfell is once again in the middle of a hot debate. Jon wants to go south and meet with Daenerys and Tyrion, but Sansa and the peanut gallery want him to stay in the North. He gives everyone there a little Kendrick Lamar (be humble, sit down) and exercises his right as king. Sansa is upset, until he turns and gives her control of the North in his stead, showing her the vote of confidence she wanted all along. And a sappy ‘awwww’ sweeps through the crowd.

Then Jon goes full WWE and choke slams Baelish in the crypts. As much as I’d like to be in Jon’s shoes right there, I wouldn’t have gone so hard on Baelish because he is incredibly dangerous. People in high places seem to die all around him. I’m sure his relentless scheming will certainly come to fruition at some point this season.

Sam’s ever-pleasant father Randyll Tarly makes an appearance here (the guy Sam stole the sword from). Jaime offers a job to him as his second-in-command if he betrays Olenna Tyrell, to which he turns up his nose and gives the King Slayer a lecture about backstabbing. Ouch. Still, the job opening is up in the air and it looks as though Lord Tarly will probably take the position.

Cersei and her mysterious mad scientist Qyburn seem to be inseparable now. When discussing how to fight the dragons, Qyburn gets that crazy look in his eye like he’s got something up his sleeve. He then takes Cersei to the crypts and unveils his latest invention: The Big Ass Crossbow®.

They shoot ole Balerion’s eye hole and Cersei flashes her first almost-smile of the season. This battle is going to be epic. 4. Jorah and Sam Get Weird

I’m sorry. I know how badly you guys want to relive that brutal little scene at the Citadel. Grand Maester Marwyn tells Jorah he will live for 10-20 years, but will lose his mind within six months. Damn…

Luckily, our favorite bookworm Sam miraculously finds a forbidden cure for Grayscale and decides to try his luck out on Jorah on his last night. I love how the series wove together the Mormonts and Sam. Jorah’s father, the Old Bear, was like a father to Sam at the wall, so he decides to show compassion to help his son years later. I don’t think they’d feature this scene so prominently if Jorah didn’t have an important role to play.

Oh, and that transition to the pie crust? That’s messed up, GoT. Arya finds out from her old pal, Hot Pie, that Jon is alive and well and has won control of the North at Winterfell. The excitement in her face is evident, and she immediately gets up and leaves, eager to get back to her family and her home. The scene with Hot Pie shows a little affection from Arya for the first time in many seasons, but she quickly friend zones him and embarks on her new journey. I guess Cersei’s death can wait.

Then, somewhere further north, Arya’s horse gets spooked. A cold wind sets through the forest. The pines creak with uneasiness. There’s someone nearby. Or something… No, not this time. It’s Nymeria!! Arya is overjoyed to see her direwolf (not seen since season 1), especially since those wolves were about to rip her apart! She pleads with Nymeria to come along. But, the wolf reacts much like Arya would herself—she turns away and continues her own, independent life in the woods. As much as I would love Arya to have a direwolf by her side, Nymeria belongs to the wild now. She was raised in the wild since she was very young, and Arya is not her master anymore.

Maisie Williams killed this scene. She conveys so much emotion in her eyes: terrified at first, then hopeful that Nymeria will come with her, then devastated that she turns away, before acceptingly admitting “Not my Nymeria.” Powerful stuff.

I thought things were dying down as I watched a tacky makeout session with Yarra and Ellaria Sand in the captain’s quarters of the ship. The line “foreign invasion” is used, and as my eyes were in the process of rolling—BOOM— things start getting crazy. Euron’s armada comes full force, crushing down upon Yarra’s ship and splatting a dude in the process. He jumps out like a maniac and begins axing everyone aboard. The three Sand Snakes are outnumbered and unprepared, as two of three are brutally killed by Euron. The other snake and Ellaria are trapped below deck and the implications are for the worst. Yarra joins the fray and fights hard until she is overcome by her uncle. With an axe to her throat, Euron calls out Theon, who looks over like a scared puppy and freezes. He has a chance to save her, but his Reek-iness comes back in full force as he sees people being gouged and flayed all around him. He slowmo drops his sword and valiantly dives off the boat to save himself as Euron laughs like a complete maniac.

Euron’s gift to Cersei turned out to be the iron fleet! He keeps Yarra and the two Sands alive, presumably to use them as leverage for the battle to come. This ambush not only takes away an entire fleet from Daenerys, it also ruins the plans to transport the Dornish soldiers to King’s Landing. It will be very interesting next episode to see what countermoves Khaleesi has up her sleeve.

Thanks for reading. Leave a comment with your biggest take from the episode and we will see you next week for another recap.