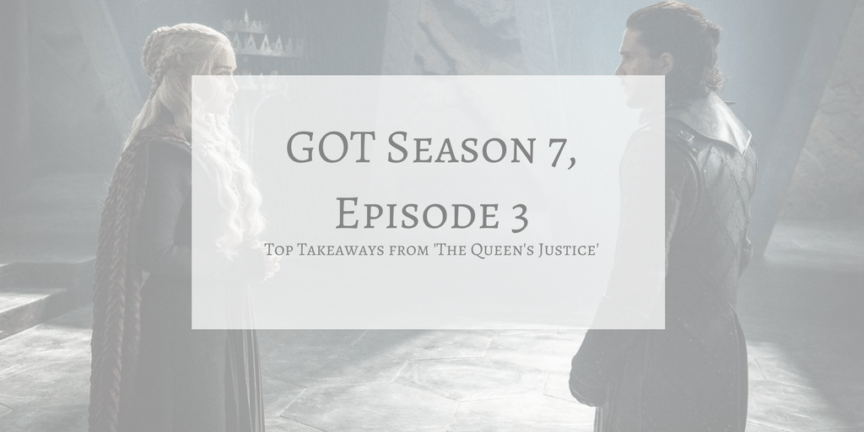 As usual, things don’t exactly go according to plan in the last episode—well, except for Cersei. She’s PISSED and making serious moves to assert her dominion over each of the seven kingdoms. Jon and Daenerys disagree for 20 minutes, Sam’s cure ends up working on Jorah, Bran creeps everyone out, and Olenna Tyrell drops the mic on Jaime.

As Euron comes through the city dragging Yarra, Ellaria and Tyene on dog leashes, the townspeople do what they do best: Jeer and throw rotten food/feces at miserable women in soiled clothing. Meanwhile Euron is hamming it up like it was his first time on the red carpet. I think Pilou Asbæk is perfectly casted for him. He does a great job portraying the intimidating confidence of the captain, as well as the bloodlust (or regular lust) and destructive anger that’s always brimming beneath the surface. Euron delivered on his promise to bring Cersei a gift, and what a gift it was, indeed. He gives her the iron fleet and the woman who recently killed her daughter. She even smiles a little (Cersei smile sighting #2)! Afterwards, Euron gets all weirdly sexual with Jaime about his sister, while Jaime just looks down like a dog with his tail between his legs. Seems like he might have lost something else along with that hand…………………………….. (his balls). Afterwards, we get to see Cersei’s ultimate punishment for Ellaria Sand—watching her daughter “rot” in a dingy cell seems like a nice way to even things up. Wonder if Ellaria is regretting wearing that particular shade of lipstick back when she killed Cersei’s daughter, Marcella. Regardless, that whole elaborate ‘Saw’ torture setup seemed like she had been planning it for months. I wonder if she began making revenge plans as soon as she found out about Marcella’s death. Putting them barely out of reach so that Ellaria can’t kiss her and end their lives together is just heartbreaking.

It only took SEVEN seasons, but ice and fire have now officially met! Khaleesi is introduced by her 30 names and Jon is just “Uh- Jon Snow,” courtesy of Sir Davos. Overall, their meeting was a bit of a letdown. I didn’t expect them to be best friends right away, but they don’t even try to compromise on the whole kingdom thing. Jon wants to have a separate kingdom in the North and needs her help to defending the wall, and Khaleesi wants him to bend the knee and help her take King’s Landing. Then they just kind of bicker like brats for a while. Jon neglects to reveal that he’s been resurrected, which I feel like might be a detail you mention at some point but, hey, that’s just me. Luckily, Tyrion comes through and talks to Jon while he’s “brooding” by the sea. He relays his thoughts to Khaleesi, who seems to come around a bit by the end. Whether or not they fight alongside this season is yet to be determined.

[Fun Fact: Dragons are apparently super quiet until they’re a foot away from killing you] So, Bran’s the Three-Eyed Raven. What is the Three-Eyed Raven, you ask? Well the Three-Eyed Raven can’t just tell you about the Three-Eyed Raven. The Three-Eyed Raven has to be vague and standoffish, and bring up the most painful memories in your past instead. Good looking out, Bran. Sansa’s face after he tells her his new title is priceless. Just a confused stare that anyone would give someone who just rattles off a name like that without giving any explanation. For some reason, he brings up the time Ramsay Bolton raped her on her wedding night and offers zero emotional response to it. It appears Bran has seen so much and witnessed so many awful things that he is completely numb to pain and suffering. He may have truly been sorry, but now he lacks the ability to feel and convey the normal emotions an average person would. Regardless, Bran’s abilities will likely be a valuable asset to the coming war, assuming he’s “allowed” to participate.

4. Olenna Tyrell is a Boss Til Death

Jaime has abandoned Casterly Rock in a clever move to take Highgarden. He knew he didn’t have the numbers and supplies to keep both King’s Landing and Casterly Rock, so he chose to take the Tyrell’s domain to control their rich supply lines and fortify another position in Westeros. A disappointing battle scene that really saved money in the budget let’s be honest, but at least we got to see Grey Worm make a human skewer.

It’s surprising to see Tyrion outsmarted like that. He usually takes all things into consideration when planning a battle, but he is fighting fellow Lannisters, after all. Lannisters have proven to be cunning strategists who will do whatever it takes to win the war. Their move to Highgarden adds yet another vital resource to Cersei’s arsenal. In the beginning of the season we thought she was completely outnumbered. But just when you thought she was down and out, she gains control of an entire fleet and another powerful kingdom. Who could possibly knock her down a peg or two? Enter Olenna Tyrell. Ever the sharp-tongued badass even when approaching death, she plays the scene as cool as can be. After an awkward transition to the post-battle (budget cuts), Jaime enters Olenna’s chamber and announces the defeat of Highgarden which doesn’t seem to phase her at all. She knew they would lose before the battle even began, acknowledging that her people were never great fighters. Jaime plays the nice guy and offers her a painless death, which she graciously accepts—before unloading on Cersei, calling her a total monster and telling Jaime he’ll one day regret his role in her ascent to the throne. Just when Jaime is about to leave her in peace, she drops the line “I’d hate to die like your son,” with a playful smile. Then she drops the BOMB that she killed Joffrey!! Of course, we already knew this, but the suppressed horror on Jaime’s face was evident. And Olenna truly enjoys his shock and confusion. I have a feeling her smile had less to do with telling Jaime and much more to do with envisioning Cersei’s face when she finds out it was her the whole time. With his mind blown, Jaime again slinks out like a neutered Chihuahua. Even on her deathbed, Olenna Tyrell gets the last laugh on the Lannisters. [Mic Drop].

Thanks for reading again this week! Leave a comment with your biggest take from the episode and we will see you next week for another recap.